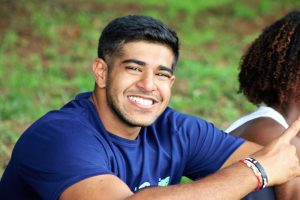 The Office of Residence Life and Housing is celebrating an honor received, recently, by resident advisor (RA) Kishan Patel.

The North Carolina Association of Residence Halls (NCARH) named Patel as North Carolina’s Resident Advisor of the Month for October. The Wake Forest Chapter of the National Residence Hall Honorary (NRHH) nominated Patel, who is an RA in Student Apartments.  A junior majoring in health and exercise science, Patel is from Stockbridge, Ga.

The nomination describes Kishan as “a pivotal leader.”

The nomination continues:  “I have heard overwhelming praise from fellow RAs, staff, and his instructors about his caring nature, inquisitive approach to problem-solving, and commitment to going above and beyond what duty calls. Kishan’s enthusiasm and community focus channels the University’s motto ‘Pro Humanitate’ and I am certain his impact has rippled through the campus environment far beyond Residence Life & Housing.”

The NCARH chooses winners each month based on submissions from universities across the state.

Patel will be formally recognized at the NCARH Annual Conference next February at Meredith College in Raleigh.