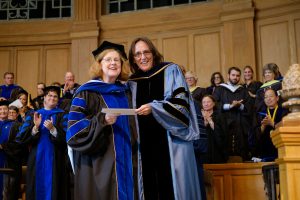 The Society for Classical Studies has selected Mary Pendergraft, professor of classical languages, as a recipient of one of its 2017 awards for Excellence in Teaching at the Collegiate Level.

Pendergraft, chair of the classical languages department, “has tirelessly and masterfully taught, advised and mentored countless students,” according to the award citation.

She is the recipient of numerous awards, including the Award for Excellence in Undergraduate Advising presented to her by Wake Forest in 2016.  Three years earlier, she received the Excellence in College Teaching Award from the Classical Association of the Middle West and South.  That same association in 2013 presented her with the Ovatio, the association’s highest award for service to it and the classical languages profession.

At Wake Forest, she has been advisor for the University’s Eta Sigma Phi chapter for more than two decades and has encouraged many students who have attended and presented at the organization’s annual national conference.

“She has in a sense been mentoring the very field of Classics itself by directly inspiring so many students to remain engaged with the ancient world as teachers and as avid lifelong learners,” the citation states.