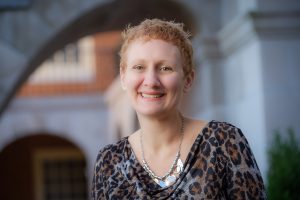 The North Star LGBTQ Center in Winston-Salem presented the In Good Company Award to Angela Mazaris on Nov. 9 at the organization’s annual event that honors LGBTQ-friendly organizations, their employees, local volunteers and activists. Mazaris is the founding director of Wake Forest’s LGBTQ Center.

Intended to recognize leaders in creating inclusive and welcoming spaces, the award honored Mazaris for her leadership of the University’s LGBTQ Center.  She was among other honorees at the annual event that featured a keynote address by undocumented activist Moises Serrano, who is described as committed to uniting the immigration and LGBTQ movements.

Mazaris is also a member of the faculty in the Department of Women’s, Gender and Sexuality Studies.