Conference on Muslim identity in South Asia to be held Sept. 15-16 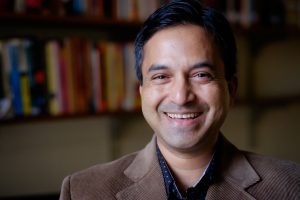 A two-day workshop/conference to focus on the issue of Muslim identity in South Asia will be held Sept. 15-16 at Reynolda House Museum of American Art.  The workshop is entitled “Locality, Genre, and Muslim Belonging in South Asia. ” It is organized by M. Raisur Rahman, associate professor of history at Wake Forest, and Razak Khan, research fellow at the Centre for Modern Indian Studies in Gottingen, Germany.

The workshop will be free and open to the public.  No registration is required.

According to organizers, as the year 2017 marks the 70th anniversary of India’s independence and partition, the comparative and interdisciplinary framework of the workshop hopes to build new dialogues across borders on shared and divergent trajectories of Muslims in South Asia.

Wake Forest sponsors for the workshop include the Provost’s Office for Global Affairs, the Department of History, the Middle East and South Asia Studies Program, and the Humanities Institute. Other sponsors include the American Institute of Pakistan Studies and the National Endowment for the Humanities.