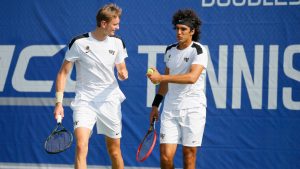 This weekend promises to be full of excitement as Wake Forest’s spring sports continue the quest for ACC and national championships.

Thursday night’s 7-4 win improved the Deacons’ ACC record to 18-10, setting a record for the most conference wins in a season. In addition, senior right-hander Parker Dunshee broke the school record with his 313th career strikeout. At 37-16, Wake Forest has assured itself of a top-four seed in next week’s ACC Tournament and could secure the No. 3 seed with one more victory over Pittsburgh.

Thursday, the men’s tennis team continued its quest for a national championship by shutting out 17-time national champion Stanford 4-0 in Athens, Ga.  at the NCAA Tennis Championships. The Deacons, the No. 1 seed, have reached the Elite Eight in men’s tennis for the first time in school history and will face ACC foe North Carolina on Saturday at 4 p.m. for the right to advance to the Final Four. The Deacs beat the Tar Heels in March in a regular-season match.

Next week, Will Zalatoris will represent Wake Forest in the NCAA Men’s Golf Championship, also at Rich Harvest Farms. Zalatoris has three career individual wins and earned ACC Player of the Year honors this spring.

Links to follow all Wake Forest teams in championship action can be found on WakeForestSports.com.