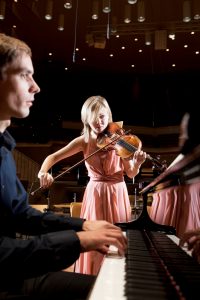 The Russian/English violinist and the French pianist are considered among the finest collaborating musicians in Europe. The London Times concluded its review of the duo’s recital at the Cheltenham Festival with the statement “Both of these players have the potential to conquer the world.” The duo’s concerts at London’s Wigmore Hall were received with great acclaim, and Ibragimova’s many recordings on the Hyperion label have established her as one of the world’s greatest younger violinists.

The program will include the music of Bach, Brahms and Schumann.

Tickets for members of the community range in price from $5-$18.