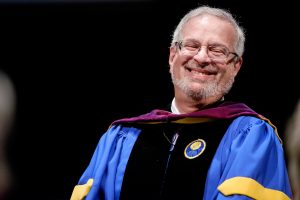 Levy, author of “Beethoven: The Ninth Symphony,” taught a string-quartet seminar at the conference. He has been engaged in Beethoven scholarship throughout his academic career.

The conference was held at the Israel Institute for Advanced Studies on Hebrew University’s Givat Ram campus.

The Jerusalem Post published a story about the conference and quoted Levy substantially.

“No other composer speaks to my intellect and soul in equal measure as Beethoven does with his music,” Levy is quoted as saying in The Jerusalem Post.

In the piece, Levy is reported as lamenting the lack of awareness of Beethoven by students in the United States’ school systems.