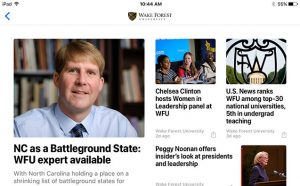 On Sept. 16, Wake Forest University introduced its Apple News channel to complement the delivery of its news to mobile devices. The Apple News app, which comes standard on devices running iOS 9, delivers personalized news digests in real-time from news sources around the world – and now Wake Forest.

Users can select from a variety of news sources or topics to appear in their Apple News feed. Now news published to news.wfu.edu can be automatically delivered to iPhone or iPad users through the app.

Since the launch of the redesigned news.wfu.edu website in May 2016, more than 51 percent of visitors came to the site using a mobile device or tablet. In 2015, a majority of smartphone owners used their phones to follow breaking news events, according to a report from the Pew Research Center:

“While journalists are the primary audience for our online newsroom, Wake Forest news stories are a great way for students, faculty, parents and alumni to stay connected with what’s happening on campus. Apple News makes it easier than ever for anyone to enjoy the latest from Wake Forest,” said Katie Neal, executive director, news and communications.

To add Wake Forest to your Apple News favorites list, click http://wakeforest.news/2csIn8F from an Apple device running iOS 9 or later.