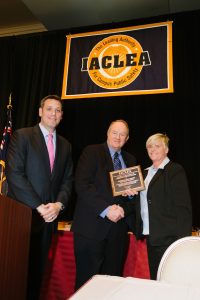 Police Sgt. Lesia Finney, who leads community policing at Wake Forest, was presented the Award for Innovations in Community-Oriented Policing at a recent national meeting of the International Association of Campus Law Enforcement Administrators (IACLEA) in Phoenix.

Finney, who joined the University Police Department in 1999, has served as coordinator of community-oriented policing since 2011.  In that role, her many responsibilities include, in part, collaborating with neighborhood associations, the Winston-Salem Police Department and Wake Forest students to initiate partnerships that enhance community living; leading orientation activities for all who join the University community; and serving in a public information officer role.

Finney also serves a project manager who has helped, among other things, reengineer the department’s recruitment, selection, hiring and promotional practices; be a leader on the University’s Police Advisory Board; and develop new policies.