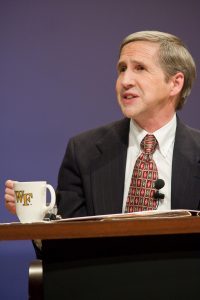 Professor of Counseling Sam Gladding has been selected for induction into the 2016 inaugural class of the U.S. Army ROTC National Hall of Fame.

According to the Department of the Army, the Hall of Fame induction is awarded to alumni “whose character and distinguished service epitomizes the qualities Army ROTC embodies.”

Gladding received bachelor’s and master’s degrees at Wake Forest, in addition to receiving a master’s degree at Yale University and a doctorate at the University of North Carolina at Greensboro.  He joined Wake Forest’s faculty in 1990 and has also served in administrative positions, including associate provost and assistant to the president for special projects.

Gladding is the author of the newly-published “The History of Wake Forest Volume 6.”