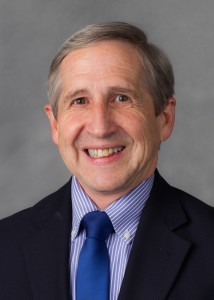 Counseling professor Sam Gladding, whose dozens of books about counseling are read worldwide, is focused now on a topic very close to home and his heart—Wake Forest University and its history.

Recently, he completed a nine-year project to write “The History of Wake Forest University: Volume 6.”  The book tells the story of the University when it was led by Thomas K. Hearn Jr.  From 1983 until his retirement in 2005, Hearn served as Wake Forest’s 12th president.  He also was the University’s second-longest serving president with 22 years at the helm.

“Wake Forest went from a strong regional, Baptist-affiliated university to a top 30 national, independent institution of higher learning,” according to Gladding, a Wake Forest alumnus who returned to the University in 1990 as assistant to the president for special projects and professor of counseling.  He later spent several years as associate provost before focusing all of his efforts at the University on the Department of Counseling.

An opportunity to have the book signed by Gladding is ahead.  On April 9, he will be signing on campus at Words Awake 2, a two-day celebration of Wake Forest-associated writers and writing.  The signing will be held from 5 p.m. to 6:30 p.m. at Benson University Center, fourth floor.  Also signing books will be Provost Emeritus Ed Wilson, author of “The History of Wake Forest University, Volume V,” which focused on the University between 1967-83, when James Ralph Scales was president.

A private signing event for Gladding, organized by the Office of the Provost, is scheduled for late April, also.

In March, Gladding’s book became available through Amazon in different formats, including paperback and Kindle.  On April 7, the hardback edition is expected to be delivered to campus and be available for sale and signing.  It will be carried by the College Book Store.

Gladding, who devoted years to researching Wake Forest history, declares in the book that 1983-2005 was an exciting, impactful time with a long list of achievements and milestones.

The book “traces the events that led to the explosive growth and influence of Wake Forest,” according to Gladding.

Some University highlights during those years include the following:

Gladding describes Hearn as “a visionary and decisive leader.”

“With him, and even sometimes ahead of him, was a supporting cast of faculty, students, administrators and staff who were creative, innovative, but above all concerned with how to live and implement the University’s motto: Pro Humanitate,” according to Gladding.

After a long illness, Hearn died in 2008, three years after his retirement.

After returning to Wake Forest, he chaired the counseling department for several years and continues now as a professor in the department, teaching and writing.  Nationally, Gladding is recognized as one of the most published authors in his field.  He is the author of 45 books (including revisions) on counseling topics.  He regularly travels worldwide, lecturing at universities and delivering keynote addresses at national and international gatherings of counseling professionals.