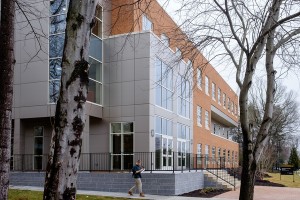 The Health and Exercise Science (HES) Department has more room to stretch and grow, thanks to a new addition to the Worrell Professional Center.

The 29,000-square-foot addition, which opened this semester, houses state-of-the-art research space, classrooms, and academic and administrative offices. The facility includes a two-story entry into the HES suite at the ground floor alongside Carroll Weathers Drive, making it easily accessible for students, faculty, staff and visitors.

“Functionality was the key,” Berry said. “We didn’t gain that much square footage, but the layout and design is making all the difference which is fantastic for our department in all respects.”

The functional aspects include four dedicated classrooms and modern lab spaces for the 150 HES majors and 18 graduate students. Students also now have a lounge and comfortable living room-style spaces perfect for studying or socializing. The faculty who lead research teams – many of which are nationally renowned – also have dedicated lab space whereas before labs were shared between teaching and scholarship. Though the flow of the building is separate from the law school, the HES wing is connected to the existing Worrell building through an interior hallway.

Longtime researcher and faculty member Steve Messier said that while Reynolds Gym served the department well for many years, the new space is “more appropriate for the research we do and for the students we teach.”

“There’s no brains in the bricks, it’s the people,” he said. “But it’s nice to have a facility that reflects the work that goes on here.”

Megan Ray, a junior HES major from Ft. Worth, Texas, was only too happy to make the transition from Reynolds Gym to the new space. “I think it’s awesome, especially the new anatomy lab. It’s a lot nicer with more space to study and better technology.”

“It’s so much more spacious, which is great for such a stressful class because it allows students to have the choice between collaborating with classmates or independently reviewing the material. I think that having such nice facilities gives this subliminal message to students that their quality of education is an integral part to Wake Forest and really gives light to the privilege that comes from being a student studying HES.”

While the HES space was being built, other areas within Worrell were also under renovation, including approximately 9,000 square feet on two floors to create new academic space and the Law Commons. The renovations for HES and the Law School were funded in part through donations to Wake Will: The Campaign for Wake Forest.