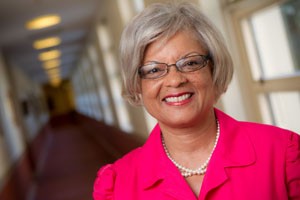 Beth Hopkins, director of outreach and professor of practice in the School of Law, was honored with the Martin Luther King Jr. “Dare to Make a Difference” Award in recognition of her efforts for human and civil rights on Jan. 18 at the Benton Convention Center.

Since 1981, an observance has been held annually at noon to commemorate the birthday of Dr. Martin Luther King Jr., according to event founder Mütter D. Evans, former owner and general manager of WAAA Radio, who continues to organize it.

Three individuals — Hopkins, Nigel D. Alston and Rodney Sumler (posthumously) — were honored with the MLK “Dare to Make a Difference” Award in recognition of their efforts for human and civil rights.