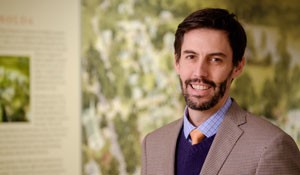 Reynolda House Museum of American Art has named Phil Archer the Betsy Main Babcock Director of Program and Interpretation. Archer was director of public programs at the museum since 2002. He brings nearly 20 years of experience to the position when he begins the new role Feb. 1.

“Phil’s curiosity for learning and passion for this place is transmitted to all who experience Reynolda,” said Allison Perkins, the museum’s executive director and Wake Forest associate provost for Reynolda House and Reynolda Gardens. “He is the right person to lead the program for this museum and this historic site into its next century.”

Archer joined Reynolda House in 1997 and has immersed himself in all aspects of the museum. He has held positions in managing special projects and public programs, and served as the museum’s representative to oversee the design and construction of the Mary and Charlie Babcock Wing from 2002-2005. In August 2015, he was named the interim director of the curatorial and education division, following the departure of Elizabeth Chew.

Programs held under Archer’s direction have included free community days featuring collaborations with organizations like the Winston-Salem Festival Ballet and the Guilford Native American Association; Cinema Under the Stars, the popular outdoor film series co-presented with the University of North Carolina School of the Arts entering its 11th season in 2016; and community forums addressing current topics such as downtown development and the creative economy. He launched the museum’s Portals of Discovery continuing education series in 2004, and he has curated or served as managing curator for three exhibitions including “Wonder and Enlightenment: Artist-Naturalists in the Early American South.”

Archer has coordinated numerous collaborations with faculty across campus, including partnerships with the Pro Humanitate Institute and IPLACe, The Interdisciplinary Performance and the Liberal Arts Center. This winter he is co-teaching “Reynolda: An American Story” as part of the ZSR Library Lecture Series.

“I am delighted that Phil Archer will be stepping into this important new role,” says Michele Gillespie, Presidential Endowed Chair of Southern History and Dean of the College. “All of us in the Wake Forest community who have worked with Phil know he is a superb scholar of the place and the people, and our teaching and scholarship is made better through his keen knowledge and generous support. His imagination, energy and commitment to the world of art and history and all things Reynolda is legendary. I look forward to the vision he will bring to his new post.”

“My attachment to Reynolda started with what I saw and learned—the art, buildings, gardens, and stories,” says Archer. “But it grew when I came to concerts and readings and sensed a cultural community that I wanted to join. I’m excited to continue expanding the circle of people who feel that same sense of belonging with all that it offers for mind and body.”

Among many programs Archer planned this spring in conjunction with Reynolda’s exclusive debut of “Ansel Adams: Eloquent Light” is a yoga class that will take place outdoors on the Reynolda lawn. Archer says this new program reflects Reynolda’s historic and present commitment to mindfulness and wellness, both inside the museum and outdoors.

A native of Pennsylvania, Archer graduated from Wake Forest with a bachelor’s degree in English and a master’s degree in business administration. “The Triad Business Journal” named him one of the top 40 leaders under 40 in 2010, and he has been the recipient of two awards from the Arts Council of Winston-Salem and Forsyth County: for Arts Knowledge-Sharing in 2012 and for Arts Development in 2014.

The Betsy Main Babcock Director of Program and Interpretation is an endowed position at the museum, funded by the Mary Reynolds Babcock Foundation.