Malika Roman Isler joined Wake Forest in 2015 as the director of wellbeing, a role that she notes has several connections to the work of the United Way.

“At the foundation, both the United Way and the WFU Thrive Initiative approach community wellbeing holistically,” Roman Isler said.  “Both programs are inclusive of comprehensive strategies to not necessarily be directive about how people live, but to improve the conditions, opportunities, and tools we all have to help us thrive.” 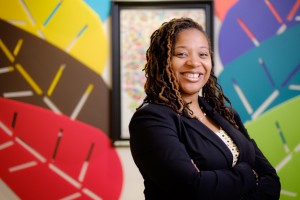 Indeed, Roman Isler points out that to support wellbeing in any community, programs must align with local priorities and support local capacity and infrastructure. Through the Thrive initiative, the Office of Wellbeing focuses on many areas of interest and need as defined by Wake Forest students, faculty, and staff: offering skills-building workshops and engaging programs to reduce stress, promote positive health behaviors and culture and build the sense of community.

In line with Thrive’s approach with the on-campus community, she says she appreciates the way that the United Way of Forsyth County does not employ a “band-aid” approach to community improvement.

“Their initiatives on education, financial stability, and access to basic health needs get at the root causes of inequitable outcomes, and allow for structural changes to occur,” she said.

In a similar fashion, through Thrive, Roman Isler’s office engages in collaborative partnerships across campus and the broader community to create a shared culture that encourages meaningful living as each individual chooses to define it.

“We work together to ensure that the conditions and available resources are conducive to thriving, and we understand that our work together creates the greatest impact. I see the United Way as a leader in the same way for our broader community through efforts like Place Matters,” Roman Isler said. Place Matters is a resident-led initiative to target investments where they’re needed most, with a goal of reducing poverty and creating enduring positive change.

“Having a resident-led initiative, and partnering with a grassroots collaborative such as Neighbors for Better Neighborhoods, increases the opportunity for UWs efforts to align with the local priorities, and facilitate community-owned systems change, as voiced by the people who live a set of experiences daily,” says Roman Isler. “This type of collaborative, sustainable, and outcomes-focused work encourages me to give to the United Way.”