Staff recognized for service milestones; Employees of the Year named 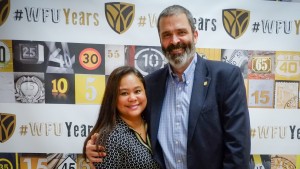 Employees of the Year Darlene Starnes and Ken Bennett

Members of the Reynolda Cabinet honored service milestones of 213 Wake Forest staff members who were celebrating more than 2,780 years of combined service. These individuals were recognized at a luncheon on Nov. 10 at Bridger Field House.

Those recognized with 30 or more years of service included:

This marked the 15th annual Staff Rewards & Recognition event held by Human Resources.  Later in the day, a campus-wide reception was held at Reynolda Hall open to all faculty and staff to attend.

Ken Bennett, University photographer, and Darlene Starnes, administrative coordinator for the Intercultural Center, were also recognized as Employees of the Year at the Staff Rewards & Recognition Luncheon.

Bennett has been University photographer at Wake Forest since 1997. As well as being awarded Employee of the Year, he received the University Photographers’ Association of America “Master of the Profession” award in 2013 and the CASE “Photographer of the Year” award in 2014. Bennett is said to have set the gold standard for his profession through his iconic work. His talent, creativity, and commitment to excellence have contributed to an increase in national recognition, admissions applications, and philanthropic giving.

As the award nomination reads, “No one assigns Ken Bennett to take photos at sunrise because that’s when the light is best in Reynolda Gardens, to shoot a Sunday afternoon field hockey game ‘just because,’ or to climb to the top of Wait Chapel to get aerial views of Commencement. He does these things out of profound initiative and unwavering determination. And he rocks it every time.”

Starnes, in addition to being awarded Employee of the Year, was also recognized for celebrating 10 years of service at Wake Forest and has been described as a model of integrity, a true gift, and the epitome of Pro Humanitate. During her decade of service, she has taken on the roles of mentor, friend, substitute mom, and safe space to the many students who cross her path every semester. Her work helps to provide important infrastructure and support to underrepresented populations. As the nomination reads, “she does so much to make our campus a more inclusive place, and she is a trusted resource for LGBTQ students.”

The luncheon also marked the debut of TalenTV, a video series devoted to celebrating the unique stories of Wake Forest’s campus community while working to recruit, retain, and develop talent. Watch the debut episode and submit ideas for upcoming videos to Human Resources via Twitter @WFUtalent or email AskHR@nullwfu.edu.