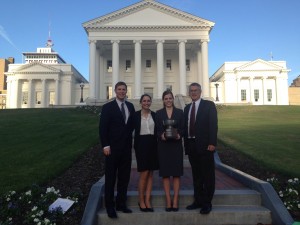 Price won the award for the best oralist, thereby earning the team every possible award given at the tournament, said team adviser Professor John Korzen (BA ’81, JD ’91), who accompanied the team to Richmond along with Professor Charley Rose, the team’s other adviser.

For more details about the Region IV Tournament, please visit the School of Law’s website.