Wake Forest University Press will host Ciaran Carson for a lively reading on Nov. 4. The reading will begin at 7 p.m. in the Ring Theatre of Scales Fine Arts Center, and Carson will be available for a meet & greet and book signing following the reading.  Refreshments will be served. 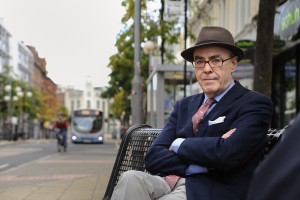 Carson is a highly acclaimed Irish poet, prose writer, translator, scholar of the Irish oral tradition, and traditional musician. His black humor, satire, and playful and serious interests in wordplay make him, as Ben Howard described in a retrospective of Carson’s career in Shenandoah, “one of the most gifted poets now writing in England and Ireland.”

He is the author of fifteen collections of poems, including the critically acclaimed Belfast Confetti (1989); First Language (1994), which won the first ever T.S. Eliot Prize; and Breaking News (2003), which won the prestigious Forward Prize for Best Collection. His most recent volume, From Elsewhere (2015), contains translations of the French poet Jean Follain paired with original responses, creating a unique conversation between two poets across time and space.

In addition to his poetry, Carson is known for traditional Irish music. He plays flute accompanied by his wife, accomplished Irish fiddler Deirdre Shannon, and has written a book about traditional Irish music, Last Night’s Fun. Carson’s quirky, funny, and quotable readings combine poetry with Irish tunes in a festive mix that makes for a delightful cultural experience.

Carson was born and raised in Belfast, Northern Ireland, where he still lives. Educated at Queen’s University, Belfast, he was appointed poetry chair at its Seamus Heaney Centre for Poetry in 2003.