The American Academy of Religion (AAR) has selected Michelle Voss Roberts of the School of Divinity as one of its 2015 recipients of the Awards for Excellence in the Study of Religion.  She is associate dean for academic affairs and associate professor of theology in the School. 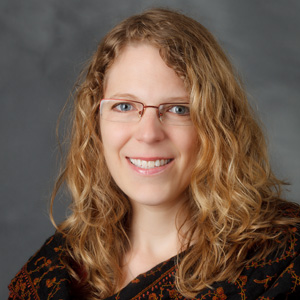 In particular, she was selected for the Award for Excellence in the Study of Religion: Constructive-Reflective Studies.  The award recognizes her book, “Tastes of the Divine: Hindu and Christian Theologies of Emotion.”

The Awards for Excellence recognize new scholarly publications that make significant contributions to the study of religion. The awards honor books of distinctive originality, intelligence, creativity and importance; books that affect decisively how religion is examined, understood, and interpreted. For more information, see https://www.aarweb.org/programs-services/book-awards.

Awards will be presented at the AAR’s 2015 Annual Meeting in Atlanta on Nov. 22.

Founded in 1909, the American Academy of Religion is the world’s largest association of religion scholars, and its mission is to foster excellence in the study of religion by promoting research, publishing, and teaching about religion in academia. As a learned society and professional association of teachers and research scholars, the American Academy of Religion has about 9,000 members who teach in some 900 colleges, universities, seminaries, and schools in North America and abroad.

The Academy is dedicated to furthering knowledge of religion and religious institutions in all their forms and manifestations. This is accomplished through Academy-wide and regional conferences and meetings, publications, programs, and membership services.