Journalism program director Justin Catanoso is spending two weeks in Latin America on assignment from the Pulitzer Center on Crisis Reporting to assess the potential impact of Pope Francis’ new encyclical on climate change in the Catholic leader’s home region. 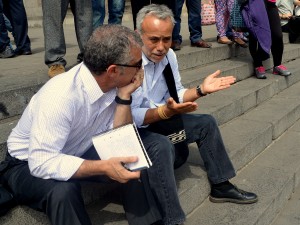 Justin Catanoso, left, with Enrique Ortiz of Lima, his guide and interpreter while in Peru. Photo by Emilia Rose Catanoso

Catanoso left for Peru July 10 and will remain until July 23, spending time in the capital of Lima, as well as the region of Arequipa. The encyclical is the Vatican’s first-ever teaching document on a secular issue as controversial as climate change. Catanoso said he chose Peru because in many ways the country is Ground Zero in the battle over global warming, where mining, deforestation, rapid development and environmental protection come in conflict in the Amazon and along the Pacific coast. Catanoso has reported from Peru twice before, most recently during last December’s 20th U.N. Climate Summit held in Lima.

“Among the biggest stories in the world in recent weeks has been Pope Francis’ much-anticipated encyclical, or teaching document, on climate change,” said Catanoso, an expert in Catholicism who was in Rome for the release, and attended the two-hour Vatican press conference. “The Pope left no room for doubt on where he stands on this issue, and those he sees linked – poverty, water quality, jobs, biodiversity, run-amok consumerism and too much short-term thinking among business leaders.”

Catanoso, also a board member for the University’s Center for Energy, Environment and Sustainability, will spend time in Lima meeting with church leaders, top officials in the ministry of the environment, NGOs, and academic leaders. “Their reaction to the encyclical is critical from a policy perspective,” he said.

He will also travel south to Arequipa, site of one of the most contentious and bloody environmental confrontations in Peru where local farmers are trying to stop a government-approved copper mine they fear will destroy their farmland and scarce water supply.

“If there is a place to test the power of the encyclical, or lack thereof, this is it,” Catanoso said. “Peru is 75 percent Catholic. Nearly all politicians and business leaders are Catholic. They revere this radical pope from their own region, where his approval rating is 83 percent. But will they follow his lead on what he and many others consider the most critical issue of our time: mitigating global warming? Many allies and admirers are already aligned against him.”

Catanoso’s reporting will appear in the News & Observer in Raleigh, WFDD-88.5, National Geographic online, Global Pulse, a Catholic web site edited from Rome, and MongaBay.com, a prominent environmental web site. As he has done previously, he plans to incorporate lessons from this assignment into his multiple reporting classes he leads on campus and in Rome.