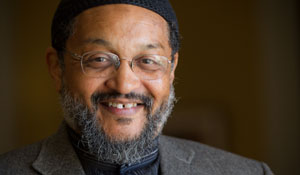 Imam Khalid Griggs, associate chaplain for Muslim life, was awarded a Lifetime Achievement Award at the 40th Annual Islamic Circle of North America National Convention in Baltimore on May 23.

The award was established five years ago to honor annually two individuals who have provided exemplary service to the Muslim community in the U.S. More than 20,000 people attended the conference where Griggs received the award.

“It was a very humbling experience to have my peers from across the nation recognize the consistence of my service to the Muslim community,” Griggs said.