Reynolda Campus faculty and staff should expect significant construction activity and related closures of parking lots and roads on campus this summer. A number of projects are already underway, and others are scheduled to begin shortly after Commencement on May 18.

Among the most substantial of these projects will be the start of construction on a new freshman residence hall, planned for the south side of campus next to Collins Residence Hall, on the current site of Parking Lot H. The Board of Trustees has approved funding for this new building, scheduled for completion in January 2017. This approximately 75,000 square foot, 225-bed facility will create new revenue for the University, as well as provide needed swing space for future residence hall renovations. University officials are currently working on a plan to replace Lot H parking spaces in another area on campus.

Also beginning this summer, Kitchin Residence Hall will undergo the first of a two-phase renovation. Phase One will comprise the interior spaces and will be completed by December 2015, while Phase Two will overhaul the exterior and is scheduled for completion in Summer 2016. This project, concurrent with the ongoing construction of the Sutton Center at Reynolds Gym, will limit both pedestrian and vehicle traffic flow at the intersection of Wake Forest and Wingate Roads. Parking Lot N will be closed to accommodate construction equipment.

“The Kitchin sidewalk and the roadways in that area will be open, but other sidewalks along Wake Forest and Wingate Roads will be blocked,” said Keith Callahan, director of planning and construction. If it is necessary to close additional locations, “We will issue temporary notifications, as we normally do, for other roads, walkways or parking areas that may be closed for extended times,” he said.

Across campus, the Z. Smith Reynolds Library will undergo several changes this summer, including a renovation that will close the ZSR Starbucks location for four to six weeks, beginning May 19.

Longer-term construction projects and their anticipated completion dates include: 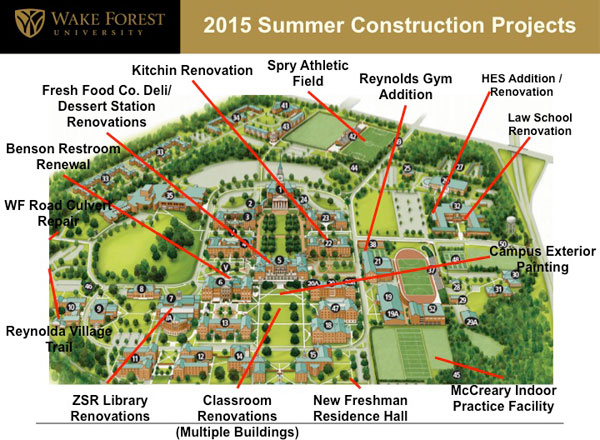