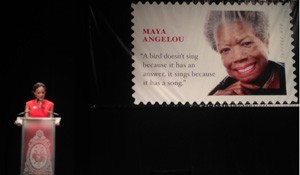 Wake Forest University faculty, staff and alumni were among those present for the dedication ceremony of the Dr. Maya Angelou Forever Stamp in Washington, D.C. on Tuesday, Apr. 7. They included Melissa Harris-Perry (’94), who served as the master of ceremonies; Barbee Myers Oakes (’80); Wade Stokes (’83); and Robby Gregg (’83).

Angelou was the Reynolds Professor of American Studies for more than 30 years until her death in 2014 at the age of 86.

“Dr. Angelou came to Wake Forest University in 1982. A decade later I took my first course with her. That same year she invited me to work in her office, responding to fan mail. In that role I had a front row seat to history when she delivered her poem, ‘On the Pulse of Morning’ at the first inauguration of President Bill Clinton,” she said. 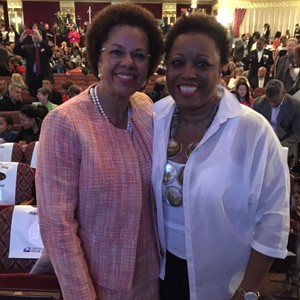 “I was 18 when I met Dr. Angelou. I knew nothing, and I didn’t even have enough sense to know I knew so little. She simply could have graded my papers and sent me away, but instead, she became my beloved mentor and guide.”

Oakes reflected on how ten months ago to the day the Wake Forest community joined the world in mourning Angelou’s loss in a memorial service in Wait Chapel.

“Today it is an honor to be with the Angelou/Johnson family to celebrate the legacy of our beloved icon at the USPS stamp dedication ceremony,” she said. “There is such an air of rejoicing in the Warner Theater because people are sharing their favorite memories of her. I believe Dr. Angelou’s heart would be filled with joy to feel the love that resonates in the theater and see the diversity of the guests.”

The Maya Angelou Forever stamps may be ordered now at this link.