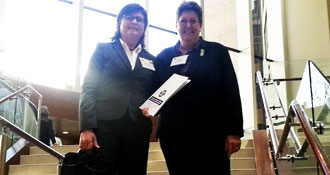 WFU Chief of Police Regina Lawson and Vickie Weaver, immediate past president of IACLEA, head out to meet with U. S. Senator Richard Burr.

The International Association of Campus Law Enforcement Administrators (IACLEA) 8th annual Capitol Hill Day was held on March 26, Washington, DC. Each year, IACLEA has selected a delegation of representatives to participate in the event. This year, Wake Forest Chief of University Police Regina Lawson was selected.

Twenty-five IACLEA members and colleagues from the Association of Student Conduct Administrators (ASCA) from 16 states and the District of Columbia participated in about 70 meetings with members of Congress or their staffers to discuss current trends and challenges in campus law enforcement. Topics of discussion included:

“It was an honor to be selected as a delegate to attend the IACLEA conference and to discuss with lawmakers important issues that affect campus safety both nationally and locally at Wake Forest University,” said Lawson.