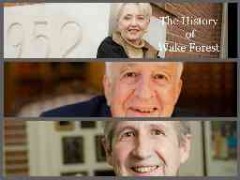 Whether you just joined Wake Forest in the new year or you’re a seasoned Demon Deacon, it’s a great time to get more familiar with the history of Wake Forest.

From Harold Tribble’s Great Removal Program to the creation of the Scales Fine Arts Center to the rise to a top-30 national University, Wake Forest’s Professional Development Center is offering three, one-hour classes on the history of our University.

Register for all three or just one.

The History of Wake Forest University I: The Tribble Years (1948-1967)
Wednesday, March 25 / Noon to 1 p.m. / ZSR Library Auditorium 404
Facilitated by Jenny Puckett (’71), Lecturer in Spanish
Hellzapoppin (or Never a Dull Moment, if you prefer): The case could be made that Harold Wayland Tribble’s Wake Forest years actually began in 1946, four years before he was hired. The post-war conditions on the old campus led directly to the Great Removal Program, a huge task for which Tribble was specifically chosen in 1950. His first six years as our 10th president were beset by multiple crises on the Old Campus, and there was no relief in sight upon the opening of the new campus in June of 1956. Only the last two years of his presidency were relatively peaceful. Tribble’s strength, thick hide and tenaciousness brought Wake Forest through 17 critical years that culminated in university status for the beloved old college.

The History of Wake Forest University II: The Scales Years (1967-1983)
Wednesday, April 1 / Noon to 1 p.m. / ZSR Library Auditorium 404
Facilitated by Ed Wilson (’43), Provost emeritus and professor of English
The years of the Scales presidency (1967-1983) will be remembered most, for the creation of the Scales Fine Arts Center and the new emphasis placed in the College curriculum on art, music and theatre; for the purchase of our first overseas houses in Venice and London; for the founding of the Babcock School; for the gradual changes in our relationship with the State Baptist Convention; and for the sensitive way in which the University responded to issues raised by the war in Vietnam and the civil rights movement.

The History of Wake Forest University III: The Hearn Years (1983-2005)
Wednesday, April 8 / Noon to 1 p.m. / ZSR Library Auditorium 404
Facilitated by Sam Gladding (’67, MAED ’71), Chair and a professor of counseling
From inter-visitation to instant communication – on the road to national prominence! Sam Gladding will take you through years 1983-2005 which was the time Thomas Hearn was president of Wake Forest. Gladding will talk about significant events during these 22 years, such as: Becoming independent of the North Carolina Baptist State Convention; hosting two presidential debates; building and rebuilding of the campus; increasing numers of Rhodes and other prestigious scholarships; rising to prominence as a top-30 national university; and winning ACC championships in basketball, baseball and field hockey.