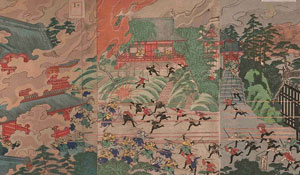 The project seeks to spark and nurture academic and popular interest, as well as disseminate new interpretations of the Meiji Restoration to international audiences. It will hold its next conference at Heidelberg University in Germany in July 2015, followed by conferences at Yale University and in Kyoto, Japan in 2016.

A Flickr gallery from the conference is available here.

The conference was made possible by the following sponsors and was held at Reynolda House Museum of American Art: