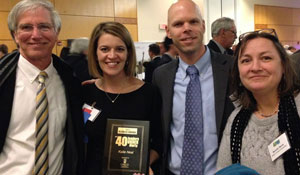 Neal’s complete “40 Under Forty” profile can be viewed online or in a special publication in the Feb. 20 edition of Triad Business Journal. Read more about the 2015 winners.

In September 2014, the Winston-Salem Chamber Commerce named Neal to its inaugural class of “Winston Under 40” Leadership Award winners.

Neal returned to her alma mater as national news strategist in June 2011. She became executive director of news and communications in October 2012.