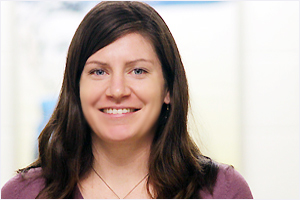 “Release: From Stigma to Acceptance,” which opened on Saturday, Jan. 17 at the Sawtooth School for Visual Art in Winston-Salem, features the words and art of formerly incarcerated offenders and was a collaboration between Project Re-entry of the Piedmont Triad Regional Council and students in Lisa Blee’s public history course.

The exhibit runs at the Sawtooth School through Feb. 28. It then moves to Wake Forest University from March 20 through May 1 and opens at the Project Re-entry Goodwill Office on May 4.

Student curators from Blee’s class participated in a standing-room-only panel in which they discussed the conception, preparation, planning and creation of the exhibit. They also discussed one of the main themes driving the exhibit: challenging preconceived notions about former offenders.

In an interview with WFDD’s Triad Arts producer David Ford, Blee described how the students came to understand the humanity of former offenders and learned to put aside stigma and negative connotations. As for visits to the prison, the point was not to observe prisoners, Blee told Ford. The point was for students to observe themselves and how they were reacting to the situation.

The exhibition includes student writings where they describe their physical reactions to being in a prison and how these physical reactions revealed subconscious biases and stereotypes. “The hope was that viewers would acknowledge that there are these unconscious expectations that we’re bringing, and if the viewer can see they are not alone in that, then they can be open to the rest of the exhibit as they walk through.” Blee said.

The exhibition is co-sponsored by Wake Forest’s Department of History and the University’s Humanities Institute.