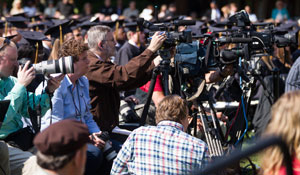 Members of the news media turned out in force to hear speaker Jill Abramson.

Abramson delivered a timely and meaningful lesson in “resilience” for the Class of 2014 and their families… not to mention those around the world watching through the lenses of the 50+ top-tier media present for the ceremony or via the dozens of outlets who streamed the event online.

In recognition of their efforts, CER received an Award of Excellence in the Media Relations category from the Council for Advancement and Support of Education (CASE) for “Commencement Speaker Drama? Getting it Right in the National Spotlight.”

The news team’s Katie Neal and Cheryl Walker will co-present on this topic at the Public Relations Society for America (PRSA) Counselors to Higher Education conference in April.

CER also won a Special Merit Award in the Social Media Strategy and Execution category for #MyWakeForest, the social media campaign designed to support Wake Will. Although #MyWakeForest was originally designed to support campaign goals, it quickly became a dynamic tool that helped advance University goals from admissions to alumni engagement.  Under the leadership of Sarah Boerkircher and Mary K. Elkins, #MyWakeForest has been a hit at campaign events, Commencement, Homecoming, new student orientation and other events.

Editor Maria Henson (’82) won a CASE Award of Excellence in the feature writing category for her piece, “An Artful Friendship,” a story about two fraternity brothers, Charlie Stott (’67) and Dick Peterson (’67) who renewed their bond of friendship in painting.

Read more on the Wake Forest Magazine Deacon Blog post, “Happiness is recognition from our peers.”

CASE advances and supports educational and professional institutions in the southeastern United States by enhancing the effectiveness of the alumni relations, fund raising, communications, marketing and other advancement professionals who serve them.