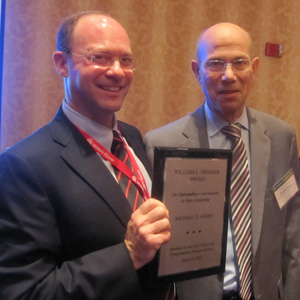 In attendance were Interim Dean Suzanne Reynolds (’77), Executive Associate Dean for Academic Affairs Ron Wright and Associate Dean for Research and Development Jonathan Cardi, who was one of Green’s former law students. Also in attendance were a number of other Wake Forest Law faculty members and staff as well as Green’s three children, his wife, Carol, and his brother and sister.

In his acceptance speech, Green credited his students (including Cardi), his colleagues, his family, but mostly his wife, Carol. “I am very humbled by this award,” he said. “This was a signal honor and hard to believe that I belong among those who have won this award in the past, people I have so admired for their contributions to tort law over the years.”

“I’d like to congratulate the 2015 AALS section award winners,” said Daniel B. Rodriguez, AALS president and dean of Northwestern University School of Law. “These law professors represent the very best of our academic community and their commitment to our students and excellence in our profession is rightly celebrated by these section awards.”

Professor Green is a nationally and internationally recognized torts teacher and scholar. He served as Co-Reporter for the Restatement (Third) of Torts: Liability for Physical and Emotional Harm, Green and his Co-Reporter President and Professor William C. Powers Jr. of the University of Texas were jointly honored with the John G. Fleming Memorial Prize for Torts Scholarship in 2012. Green is a member of the European Group on Tort Law, which prepared and published the Principles of European Tort Law in 2005. He is a founding member and Executive Committee member of the World Tort Law Society, an organization of torts scholars from Europe, Asia and the Americas.