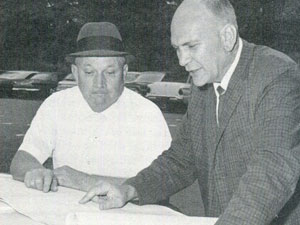 No one knew the Reynolda Campus better than Pete Moore, who helped build the new campus in the 1950s and oversaw its growth and development into one of the most beautiful campuses in the country.

Moore was named superintendent of buildings and grounds in 1953 when the new campus consisted of little more than red mud and steel skeletons of Wait Chapel and Reynolda Hall. Then President Harold W. Tribble said that no one was better suited in “training and experience and temperament” than Moore to direct the herculean task of building a campus from scratch and moving a 122-year-old College 110 miles west to a new campus.

For the next 40 years, Moore oversaw the maintenance of a constantly growing campus, the landscaping plan and construction of numerous buildings — including Tribble Hall, the Scales Fine Arts Center, the Benson University Center and several residence halls. The physical facilities building was named in his honor when he retired. When Wake Forest acquired Casa Artom in Venice and Worrell House in London in the 1970s, Moore traveled to each and organized renovations to both houses.

A native of Virginia, Moore served in the U.S. Army during World War II. He was captured by German forces in Italy and spent six months in a prisoner-of-war camp near Munich. After the war, he earned an engineering degree at the University of Virginia and worked there as the assistant superintendent of buildings and grounds and administrative engineer at the university hospital.

He arrived at Wake Forest two years after the groundbreaking for the new campus. “The campus was a total mess,” Moore recalled in a 1991 interview. I remember one dirt road got so deep in mud that we had to haul in thousands of used bricks to fill it in so the construction trucks could pass over it.”

A story in Wake Forest Magazine in the mid-1960s described Moore as “the most unappreciated man on campus.” Without his efforts, “no academic, social or athletic function could transpire,” the magazine article said. Moore liked to joke that his job remained the same over the years: make sure the heat works, the power is on, the grass is cut and toilet paper is removed from the Quad trees.