Giving thanks every day, not just on Thanksgiving 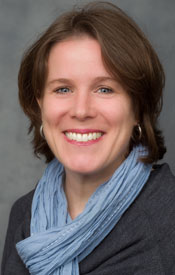 Thank you notes were non-negotiable in my house growing up. My mother was a stickler on writing thank you notes when we received gifts for birthdays or holidays, and often we weren’t even allowed to enjoy the gift until the thank you note was written, stamped and in the mail. Like most children, I balked at the idea and hated trying to come up with the right thing to say.

As an adult I moved into my first job, my first apartment, my first time truly on my own and became more disconnected from the people who had always been so prevalent in my life. I realized how much I missed these friends and family and wondered if they understood just how important they were to me.

So one Thanksgiving, I decided to make a list of the people who had been important influences in my life over the past year, and I proceeded to write thank you notes to every single person on that list, thanking them for a kindness, a friendship, a piece of well-timed advice. And as I wrote, I began to feel like I was bursting with joy for all of these people I had in my life. I never realized just how fortunate I was until I actually put onto paper and into words why I was thankful for them.

As the notes began arriving in mailboxes, my phone started ringing. Friends and colleagues and family were delighted, surprised, thankful themselves, to receive my notes of thanksgiving. Common phrases were “I didn’t know it meant so much to you,” or “I can’t believe you took the time to write that,” or “I’ve never been thanked for just being me before.” It quickly became clear that something special was happening.

I don’t write notes at Thanksgiving anymore. I write them all year, every week, sometimes every day. I’ve found that there’s no point in waiting to tell someone how much you appreciate them. I write notes to colleagues, friends, family, people I meet when I travel, hotel staff, the guy who fixes my car, and anyone else who does something that makes my life easier, makes it fun, makes it special, or brings a smile to my face.

Thank you notes are powerful. They are one of the easiest and most positive ways to transform an individual’s view of his/her world, as well as impact the life of the receiver. There are so many examples of how a simple note of thanks has transformed a relationship, healed a hurt, bonded individuals who were estranged, or even saved a life.

My challenge to anyone reading this today is this: Write thank you notes. Write lots of them. Write them until you are so full of gratitude that there isn’t room for anything else. But today, or this week, or even this month, write one thank you note. Write it to someone who has impacted your life in a positive way – someone you’ve never told. Dare to write someone out of the blue. Tell them why they matter to you, how they have made a positive difference in your life. And then sit back and watch what happens. I know those who write, and those who receive, will be transformed by this very simple act. 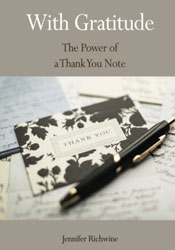