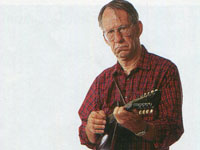 Richard L. Zuber (P ’82, ’89) may have been as well known for playing good ol’ mountain music as he was for teaching United States and American military history. He did both well enough to become a regular in the alumni/faculty bluegrass band at Homecoming every year and to teach at Wake Forest for 38 years.

He is survived by his children, Jonathan (’82) and Elizabeth (’89), and his former wife, Isabelle Zuber; and his longtime companion, Mary Bartholomew, and her daughter and son-in-law, Sallie (’91) and Robert Capizzi (’94, MBA ’01), and two grandchildren.

“Zube” was a generous and kind man who loved U.S. and military history and bluegrass music, said one of his former students, John Mullen (’71), who became good friends with him.

“He was a mountain boy who came from hard circumstances. He was fortunate that he had some folks who helped him, but he worked awfully hard. He was probably one of the most unpretentious people I’ve ever met. He was who he was.”

After going to a bluegrass festival years ago, Zuber took up the mandolin. He also played the banjo, guitar and violin. “In his later years (teaching), he would take his banjo or guitar into his classes and if he was teaching the Civil War, he would play songs from that period and explain how the songs fit into the period,” Mullen said. “Many students would talk about how that stuck with them.”

Zuber joined an alumni and faculty bluegrass band at Homecoming every year to play one song, the Stanley Brothers classic “White Dove.” “He always introduced it the same way,” said Dean of Admissions Martha Blevins Allman (’82, MBA ’92, P ’15), who plays in the band. “He said: ‘Billy Hamilton (professor of Russian) says that in order to play this song, you have to be old and you have to have known sorrow.’ It’s so mournful and haunting, and Richard did it perfectly. For me, that song will always be Zuber’s song. No one else could possibly do it justice.

Zuber grew up in Avery County in the North Carolina mountains and attended what was then Appalachian State Teachers College. The music that echoed through the hills and valleys of the Blue Ridge Mountains nourished his soul through good times and bad, he said in a story in Wake Forest Magazine in 1998. “I’ve been through the whole Southern bit. I came up poor, I came up in the mountains, I grew up with bluegrass music.”

After graduating from Appalachian, he served in the U.S. Army for two years during the Korean War. He earned a master’s degree from Emory University and a Ph.D. from Duke University. He taught briefly at The Citadel before joining the Wake Forest faculty in 1962.

He was chair of the history department from 1975 to 1983. He wrote two books, “Jonathan Worth: Biography of a Southern Unionist” and “North Carolina During Reconstruction,” and researched and wrote about polio in the North Carolina mountains.

Professor Emeritus of History Richard Barnett (’54, P ’81) said he had many good memories of working with Zuber. “He was an interesting guy, a mountain guy who was proud of his roots.” Barnett said that Zuber was grateful to have attended The Crossnore School in the mountains, which helped impoverished children. The school helped Zuber pursue his education, Barnett said.

Mullen said one of Zuber’s final acts was to give away his mandolin to a fellow musician. “He told me not long ago that he never thought he would have as good a life as he’d had, given what he started with,” Mullen said.