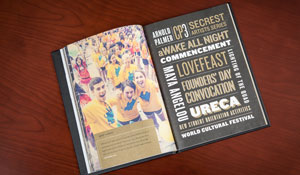 Circle of Excellence Gold Award Winners for Design of Multi-Page Publications were Wake Forest’s Forestry 101, a hardback toungue-in-cheek publication distributed to first-year students to provide information about life in the “Forest,” and the Admissions Viewbook. Ken Bennett won the Gold Award in Photography and was named National Photographer of the Year.

Vital Speeches of the Day The Cicero Speechwriting Awards recognize the speechwriters and the speakers who make it great.“Leading Lives That Matter,” a speech written by Elaine Tooley, associate director of creative communications, was delivered by President Nathan Hatch to campaign volunteers at the Wake Will campaign event in Asheville in June 2013. The speech received two Cicero Speechwriting Awards from Vital Speeches of the Day. The competition included the best speeches across business, political, nonprofit and educational sectors around the globe. The international judging panel included former U.S. presidential speechwriters, corporate speechwriters and longtime speechwriting professionals.

“Leading Lives that Matter” won the Best Campaign Speech of the Year and an honorable mention as a finalist for the Overall Grand Award.

In its 32nd year, the PRINT Regional Design Annual is the most comprehensive survey of graphic design in the United States and the only design competition organized by geography.

The UPAA is an international professional association of university staff photographers. All the members who attend the annual symposium judge the annual print competition. University Photographer Ken Bennett won First Place in the News and Features Category for a photo from the 2013 Lovefeast and Second Place in the 2014 Publications Competition for the Admissions Viewbook.

Printing Industry of the Carolinas, PICA

Since 1966, the PICA Awards have been the premier symbol of excellence for the graphics industry in the Carolinas. The following creative pieces were recognized