Locklair’s ‘Canzona for the Music Makers’ premiers in Charlotte 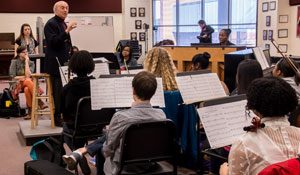 The world premiere of Professor and Composer in Residence Dan Locklair’s, “Canzona for the Music Makers” was held at Northwest School of the Arts in Charlotte on Sunday, May 4.

“Canzona for the Music Makers” for chamber ensemble was commissioned in 2013 by the Charlotte Symphony Orchestra for the Northwest School of the Arts. The new piece was supported by a grant from the N.C. Arts Council.

Locklair worked closely with the students in preparing the piece, which has a secret stamp on the six-minute work — the school’s initials are used for a four-note theme that recurs throughout.

The premiere was covered in the Charlotte Observer, “A world premiere for Northwest School of the Arts,” and Subito Music Corporation, “Locklair: Learning from a composer.”

Listen to a preview of the piece on WDAV Public Radio.