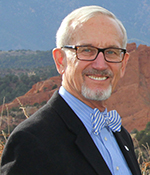 The counseling department’s annual continuing education seminar will be held on Friday, April 11. This year’s spring seminar, “The War May be Ending, but the Counseling is Only Beginning: Serving Combat Veterans and their Families,” will feature David Fenell, a professor of counselor education at the University of Colorado in Colorado Springs, whose most recent publications and presentations have focused on providing support to military families who have experienced frequent separations in response to the Global War on Terrorism.

The event will be held in DeTamble Auditorium in Tribble Hall. Registration is free to University students, faculty and staff. For additional information or a registration form, contact Louise Schatz at schatzla@nullwfu.edu

The official role of the United States in the War on Terrorism is coming to an end. There have been over two million deployments to Afghanistan and Iraq since September 11, 2001. Behavioral evaluations of combat veterans suggest that over 20% have symptoms of post-traumatic stress disorder and/or traumatic brain injury. This seminar will describe the stressors encountered by these warriors and the impact that multiple combat tours have had on the military family. Strategies for working with returning veterans and their families will be described and the important role counselors will play in helping the military family will be underscored.

Fenell has also published in the areas of rural family therapy and the effective preparation of family counselors and is the author of “Counseling Families: An Introduction to Marriage and Family Therapy.”

As a U.S. Army Reserve Behavioral Sciences Officer, he served as the Special Operations Command Psychologist for the Joint Special Operations Task Force in Afghanistan (2001-2002) and Iraq (2006). He received the Bronze Star Medal for each of his combat tours and was also awarded the combat Medical Badge for actions during his deployment to Afghanistan.