Gladding to deliver Poteat Lecture on arts and mental health 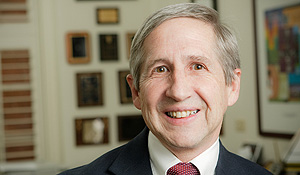 Samuel Gladding, chair and professor of counseling, will deliver the Hubert McNeill Poteat Lecture and receive the 2014 Poteat Lecture award in recognition of his research and scholarship.

Gladding’s interactive presentation, “Beyond Active Listening: Creativity, the Arts and Positive Mental Health,” will be held on Mon., March 3 at 4 p.m. in the Kulynych Auditorium at the Porter Byrum Welcome Center.

“From the ancient Egyptians to the Elizabethans to now, I’ll be discussing how people throughout history have used creative processes and the arts to promote positive mental health,” Gladding said. He will provide an overview of the latest research on the arts and psychological health, as well as share examples of writers and artists, such as William Styron and Norman Cousins, who have used creativity and humor to “gain and regain health and wellness.”

The interactive discussion will draw on Gladding’s more than 30 years of teaching, research and writing about counseling. He is the author of “Creative Arts and Counseling” now in its fourth edition, “Becoming a Counselor: The Light, the Bright and the Serious,” and dozens of other books.

He joined the Wake Forest faculty in 1990 as an assistant to then-President Thomas K. Hearn Jr., and later served as the University’s associate provost before being named chair of the new counseling department in 2003. Since then, he has taught undergraduate classes and a first-year seminar on the Creative Arts and Counseling and graduate courses on family counseling. A former president of the American Counseling Association, he was once cited as among the top 1% of contributors to the Journal of Counseling and Development, the flagship journal of the American Counseling Association.

Reynolds Professor of History Paul Escott established the award in 1997 when he served as dean of the college along with then dean of the graduate school Gordon Melson.