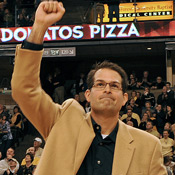 Kenny Herbst (’97), an associate professor of marketing in the Schools of Business who also happens to be a former walk-on basketball player, trended worldwide on Twitter during the 2013 ACC Tournament. His energetic support of Wake Forest as it played Maryland inspired the hashtag #IntenseWakeFan.

The Old Gold & Black asked Herbst about the experience:

“Cheering with enthusiasm is not a new thing for me, and so the reaction from fans and the media around the country that night was really surprising but fun. I think the reason that this became somewhat of a story was because I was in a seat in which I could be seen and from which I could be heard. I hope that my applauding the team for their great effort makes a difference.”

Read the full Q&A at the Old Gold & Black website »