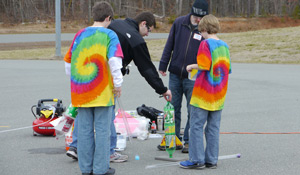 In addition to students from the Reynolda and Bowman Gray campuses, the following faculty and staff also gave of their time to oversee events such as Bottle Rocket, Forensics, Shock Value, Designer Genes and Elastic Launched Glider:

“It’s really important for us to encourage students and young adults to be interested in science,” Browne said. “It doesn’t generally get the kind of attention that those who are gifted in the arts or athletics might get. Science Olympiad allows students to get the recognition they deserve and make them feel valued for their strengths.”

Browne said that Science Olympiad also provided a unique opportunity for Wake Forest students to marry their interests in science and public engagement.

“Science Olympiad helps take the curriculum out of learning and allows the students to dive deep into a subject that they are passionate about,” said Terry Howerton (MS ’90), one of Browne’s former graduate students who now serves as Science Olympiad Coach at Atkins Academic and Technology High School in Winston-Salem. “It helps foster problem-solving, team-work and depth of knowledge. Science Olympiad is what is right about science education.”

At the end of the day, individual and team medals were awarded. The top two middle and high school teams will compete in the state competition in April.