University recognized by the United Way 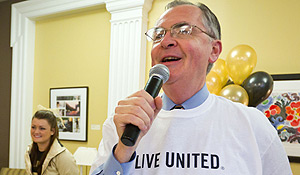 Wake Forest University has been recognized for conducting an outstanding United Way campaign.

The University received the Spirit of North Carolina Award for Campaign Excellence, given annually by the United Way of North Carolina. The award is based on employee participation and giving levels, leadership giving, volunteerism, incentive programs and campaign rallies.

The University is on track to meet its campaign goal of $350,000 for the year, say campus campaign leaders John Dinan, professor of politics and international affairs, and Lynn Sutton, dean of the ZSR Library. “This award is welcome recognition of the generosity of the Wake Forest community and the dedication of the departmental campaign coordinators, auction planning team, and others on campus who contributed to the success of this year’s campaign,” Dinan says.

This is the sixth consecutive year that Wake Forest has won the Spirit of North Carolina award.

“Wake Forest faculty and staff have again risen to the occasion and generously supported the work of the United Way,” said President Nathan Hatch. “It is an honor to be recognized with the Spirit of North Carolina Award as it indicates that the people of Wake Forest make it a priority to serve others in our community and are wholly committed to the spirit of Pro Humanitate.”

The Forsyth County United Way raises more than $17 million through its annual campaign.