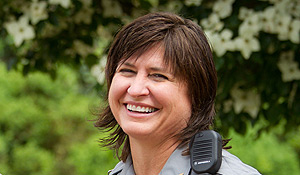 Regina Lawson, Wake Forest’s police chief for the past 20 years, is a finalist for the 2012 Campus Safety Director of the Year Award.

Campus Safety Magazine, which presents the award annually, announced the award’s finalists, recently.  The award will be announced in mid-April.

The magazine offers an opportunity to express support for a candidate by voting on its website. Voting will continue through Feb. 15. People can vote only once for the candidate of their choice.

While Campus Safety Magazine encourages voting, it also relies on a list of criteria in selecting the award recipient.  Judging criteria include, in part, a candidate’s leadership and management abilities, efforts to foster excellent community relations, abilities to manage a budget efficiently, and talent for creating and employing innovative solutions to challenges. Eligible candidates for the award include university, hospital and school officials who hold such positions as police chief, director of public safety and security and emergency manager.

In 2008, the police department was one of the first agencies to achieve accreditation by the International Association of Campus Law Enforcement Administrators. Three years later, it received reaccreditation.

Lawson is a graduate of UNC Wilmington, where she worked on the campus police department before joining Wake Forest.

Read more about Lawson in the Winston-Salem Journal »