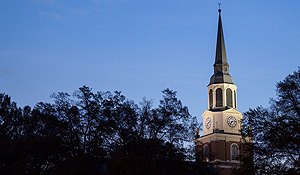 Throughout November, Wake Forest will sharply reduce lighting on Wait Chapel’s steeple as part of a broader initiative by the Audubon Society of Forsyth County and others to reduce nighttime hazards for migrating birds.

Known locally as Lights Out Winston-Salem, the initiative is intended to diminish unnecessary lighting on tall structures in downtown Winston-Salem and elsewhere so as to provide safer flying conditions for migrating birds at certain times of the year. After being approached recently about participating, Wake Forest officials agreed to reduce lighting throughout November, a peak period for southerly migration. Some downtown buildings are participating.

Eight of 11 lights directed at the steeple will be kept off in November, but other lighting around the base of the chapel and elsewhere on Hearn Plaza will be operating, as usual.

According to the local Audubon group, more than 150 species of birds pass through Winston-Salem during migration, generally travelling at night.  Lighting on tall buildings can cause some to be attracted to and crash into the buildings.