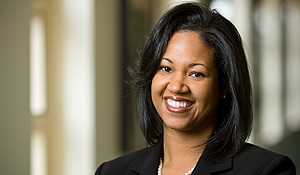 School of Law professor Kami Chavis Simmons has been elected to the American Law Institute (ALI).

The American Law Institute is the leading independent organization in the United States producing scholarly work to clarify, modernize, and otherwise improve the law. The Institute (made up of 4,000 lawyers, judges, and law professors of the highest qualifications) drafts, discusses, revises, and publishes Restatements of the Law, model statutes, and principles of law that are enormously influential in the courts and legislatures, as well as in legal scholarship and education. The ALI will have its 90th annual meeting in May 2013 in Washington, D.C.

Simmons, who joined the faculty in 2006, brings substantial experience to teaching and writing about criminal law. After receiving her J.D. from Harvard Law School, she worked as an associate at private law firms in Washington, D.C., where she participated in various aspects of civil litigation, white-collar criminal defense, and internal investigations. In 2003, she became an Assistant United States Attorney for the District of Columbia, involving her in a wide range of criminal prosecutions and in arguing and briefing appeals before the District of Columbia Court of Appeals.

Professor Simmons frequently makes presentations on law-enforcement issues and is a leader in the field of police accountability. Her articles have appeared in the University of Alabama Law Review, the Journal of Criminal Law and Criminology and the Catholic University Law Review, and other legal journals. Her research focuses on using Cooperative Federalism principals and stakeholder participation to implement sustainable reforms in the criminal justice system. Her article, “Subverting Symbolism: The Matthew Shepard and James Byrd Jr. Hate Crimes Prevention Act and Cooperative Federalism,” appeared in the American Criminal Law Review in 2012.