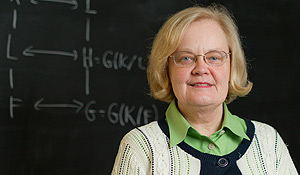 Professor of Mathematics Ellen Kirkman has been named a Fellow of the American Mathematical Society (AMS) for 2013. This is the program’s first year, and the inaugural class of 1,119 represents more than 600 institutions.

“This is the first group of AMS fellows who have been elected,” Kirkman said.  “It is a distinguished group of mathematicians, and I am honored to be chosen. It’s nice to be recognized by one’s peers.”

The AMS is the world’s largest and most influential society dedicated to mathematical research, scholarship, and education.

The initial class of Fellows of the AMS in its entirety can be found here.