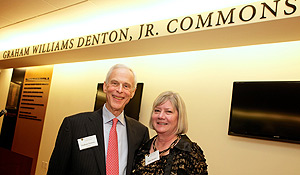 With more than 150 of his family, fellow trustees, close friends and colleagues surrounding him, Denton was surprised to learn he was being honored with more than a reception in the Charlotte Business Center. In addition to having the commons named in his honor, Denton also learned that the College Alumni Council will present him with the Distinguished Alumni Award.

Denton, who retired as Market President Executive from Bank of America in 2007, has long been a supporter of Wake Forest. He has served as president of the Alumni Association, and as a member of the College Board of Visitors and the Parents Council, when his three children were students here. A member of the Deacon Club, Denton has also been chairman of the Wake Forest Baptist Medical Center Board of Directors.

“In all these roles, he has offered thoughtful insights and objective analyses of many intricate issues,” said President Nathan Hatch during the event. “He has an extraordinary ability to ask the essential questions that identify possible solutions.”