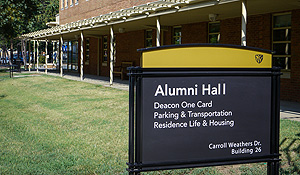 The former University Services Building has been renamed Alumni Hall.

The original Alumni Building was constructed in 1906 with funds raised from the alumni by J.B. Carlyle., according to Ed Morris, the executive director of the Wake Forest Historical Museum & Wake Forest College Birthplace. 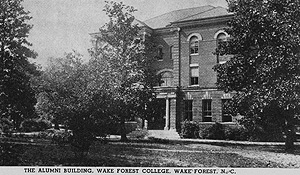 An accidental fire damaged the original building badly around 1950. Because the decision to move to Winston-Salem had been made, the administration decided to take the building down rather than try to repair it. The  Wake Forest Birthplace Museum has the cornerstone of the building on display.

The original building was primarily a classroom building. One photo that Morris has indicates that it held physics on the first floor, applied math on the second floor, and English on the 3rd floor.