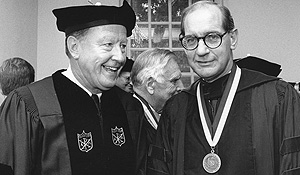 John Medlin Jr., a former CEO of Wachovia and life trustee of Wake Forest, died Thursday, June 7, at the age of 78.

“John was a true friend of Wake Forest and provided tremendous leadership as a trustee, Chair of the Board, and as a life trustee,” said President Nathan Hatch. “I will miss his wise counsel and his friendship.”

Medlin was praised for his role as both a business and civic leader, and his guiding hand played a role throughout Wake Forest’s recent history.

Medlin served four terms on Wake Forest’s board of trustees and was one of three chairs of Heritage & Promise: The Campaign for Wake Forest in the 1990s. Wake Forest honored him in 1990 with an honorary doctor of laws degree and in 2004 by electing him as a life trustee.

“Wake Forest is a model for the kind of education that people in business should have,” Medlin said in 1989. “I see in Wake Forest graduates a good balance of professional skills, values and basics in the history and behavior of man.”

Read more from the Winston-Salem Journal:

Medlin remained involved with Wake Forest, both as a donor (The Medlin Scholarship for undergraduates, The Medlin Masters in Management Scholarship) and a mentor through the Executive Partners Mentorship Program. Recently, he worked with Rob Duryea (’12), who said he would always treasure Medlin’s friendship and guidance.

Wake Forest’s motto of Pro Humanitate (“for humanity”) fit well with Medlin’s philosophy: “My involvement with Wake Forest comes because I try to be a caring person, and put something back into the society that has been generous and kind to me.”

Medlin and his wife, Polly, poured out their own generosity and kindness to many branches of Wake Forest, including WFDD, Reynolda Gardens and Reynolda House Museum of American Art. They volunteered and donated to the School of Medicine, as well.

The Medlins’ daughter, Elizabeth Hale, is a member of the Parent’s Council, and one of their grandsons, Thomas Hale, will be a junior at Wake Forest in the fall.