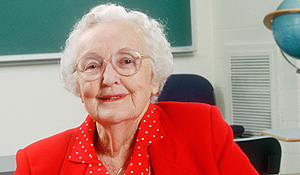 Beulah Raynor (MA ’47), an assistant professor emerita of English who taught from 1946 until 1979 — the longest tenure of any female faculty member, died on Jan. 8 in Winston-Salem. She was 101.

A memorial service will be held Wednesday at 2 p.m. in Davis Chapel.

“I don’t know how many students she taught to write — and to write well — but they were many,” said Provost Emeritus Edwin G. Wilson (’43). “And they thanked her and loved her because, despite her unwavering insistence on standards, she was helpful and kind, never giving up on even the poorest student. Many students looked to her as a mother and friend and became close to her.”

Read more about Raynor on the Wake Forest Magazine website »