WFU is Goodwill’s Corporate Donor of the Year 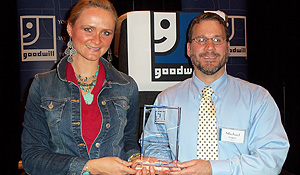 Goodwill Industries of Northwest North Carolina honored Wake Forest as its Corporate Donor of the Year at its 2011 Recognition Banquet on Thursday, Nov. 10.

Logan handled surplus property for the University for 11 years, and he shared the responsibility with Anderson last fiscal year. Since July, Anderson has been handling the task.

“The entire reception was very moving, and Goodwill did a great job of showing their appreciation for the work of their diverse staff and their community affiliates,” Anderson said. “Even as involved as I am with Goodwill, I was still very impressed with all of the wonderful opportunities Goodwill creates for the local community.”

Logan shared her sentiment: “Goodwill does a tremendous job in our community in helping those in need as well as assisting the less fortunate to be successful in life. They presented various awards to their own employers, and it was amazing to see how Goodwill was able to assist in transforming their lives and giving several a ‘second chance.’ I hope we can continue to support Goodwill through donations.” 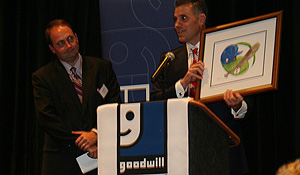 Walter, who last year donated a kidney to one of his players, Kevin Jordan, also stressed the important work that Goodwill is doing.

“I am not the hero in my story, 18-year-old Kevin Jordan is because of his courage,” Walter said, “just as is every single mom or young man who walks in to Goodwill to better themselves.”

Below are the remarks read about why Wake Forest was honored:

The honor of Corporate Donor of the Year is given to an organization that has been instrumental in its contributions to Goodwill throughout the year. This year, the award goes to Wake Forest University.

Goodwill’s commercial donations program partners with businesses to secure donations of goods that can be sold in Goodwill’s stores. Since May of 2010, Wake Forest University has been one of the largest contributors to the program, donating hundreds of items ranging from vacuum cleaners to pianos, coffee tables to cubicles. These donations are used by Goodwill, thus lowering their expenses, or sold in Goodwill’s stores to fund training programs that help thousands of people in our community.

Goodwill’s pictures from the banquet »