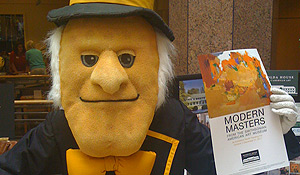 Several events will be going on during opening weekend. On opening day, museum staff will hold Looking Aloud Gallery Discoveries, a series of informal yet engaging 30-minute gallery experiences in the “Modern Masters” exhibition. The talks will be held hourly from 10 a.m. to 4 p.m. and are included with the price of admission.

On Sunday, Oct. 9 at 2 p.m., professor of music Louis Goldstein will explore the impact that the abstract expressionist painters of New York had on the great American composer Morton Feldman. In addition, Goldstein will perform Feldman’s piano music. Goldstein’s most recent recording was ranked in 2010’s top ten modern composition recordings by Wire magazine. This event is free for members and students and $8 for non-members.

Other professors also will be participating: